Just saw a post on Quartz titled ‘Foreign tourists are seeing a different India than locals‘. Arguably having been the keenest watcher of Indian tourism & particularly Indian domestic tourism over the last 10 years, I can say this with confidence – the article gets its basic premise right but does not go anywhere near enough in exploring the fundamental differences between the two. So let me give it a whirl & explore one big difference in this post.

Indians take vacations to get way from crowded & dirty cities as often as possible. This quest more often that not compels us to take short weekend breaks to nearby destinations. Data of traveller behaviour on HolidayIQ.com (every month almost 5 million Indian travellers plan breaks using travellers reviews shared on HolidayIQ.com) suggests that weekend getaways number more than 10x of long vacations in India. Such weekend getaways, are therefore by definition,  not to the great big tourist attractions of the nation but to the small peaceful enclaves near cities with some greenery left. This includes places like Araku Valley in Andhra Pradesh where hordes of people from Hyderabad, Vizag and Bhubaneshwar run to on weekends, Tarkarli in the south konkan coast of Maharashra, a favourite of people from Mumbai & Pune, Pachmarhi in Madhya Pradesh which offers respite to travellers from Nagpur, Bhopal & Indore and Mandarmani, the beach to which people from Kolkata flee regularly. Contrast this with the behavior of foreign (inbound) tourists. There are two dominant categories of foreign tourists to India – (1) the backpackers and (2) the geriatrics. The backpackers are youngsters mostly from Israel & the west who come looking for instant spirituality, undiscovered beaches and great weed, although not necessarily in that order. Most of them end up in Goa, Gokarna, Manali, & Rishikesh. The geriatircs are retired folk, mostly from Europe  who come to India as a once-in-a lifetime experience to either do the golden triangle (Delhi, Agra, Jaipur) or over the last decade, Kerala.

Getting off the plane, I could not find the baggage conveyor belt. And eventually when I did, there were no baggage trolleys. As I drove in to town, the talking heads were discussing the latest gang-rape, this time of a 30 year old BPO employee in the Dhaula Kuan area. Delhi it seemed was playing true to character.  William Dalrymple in his ‘City of Djinns’ explains how Delhi has been around almost forever, rising and falling with each successive ‘civilization’. I am sure the current avatar is unlikely to be one of its glories.

But it turned out to be a glorious day. One of those bright but crisply cold pre-winter days that along with its quick Spring makes Delhi enchanting for a short while every year. To relive great memories, I went to Nehru Park in Chanakyapuri and wandered all around it with a friend. Shubha Mudgal was playing live & open air in Nehru Park in the evening courtesy Spic Macay, but unfortunately could not catch it.  A real surprise was the tolerance towards canoodling couples. The last time I wandered Delhi’s parks, I recollect cops and similar irritating fauna harassing lovers that inevitably dot parks. Now I saw they were being left alone and wondered what has led to this change. Not being able to put my finger on it, I decided to to attribute to the person to whom all good things in Delhi are usually attributed to :  the Chief Minister, Shelia Dikshit. As we walked on the Vinay Marg side of Neru Park, I also saw the army ground over which, as a teenager, I had seen a small red aircraft do crazily daring maneuvers, while we played cricket below. It was only when news came that Sanjay Gandhi had crash landed & died that  I realised that the little red plane had been piloted by Indira Gandhi’s younger son and heir apparent. Those innocent times having passed, I saw that the army had put up a fence around the ground and I guess kids don’t play there anymore.

And on to Khan Market. Now, Khan Market is not the most natural location to obtain enlightenment, but I came close. At the bookshop there one cold evening I stumbled upon another book that fulfilled the two criteria I always look for in a book – a bright cover and many pages (yup, I know you should never judge a book by its face or by its size, but I do – which of course Outs me on other aspects too I guess). The fat book by Wendy Doniger titled ‘The Hindus – an alternative history‘ seemed too interesting to pass up and so I ended up buying it along with Kakori Kebabs from one of the bylanes; both holding the prospect of a wonderful though solitary evening ahead.

The commonwealth games were to be the coming-out party for Delhi’s small hotels, home-stays and B&Bs. But as we all know, things did not quite turn out that way. Not too many tourists in Delhi converts into despairing house owners & desolate premises. Not a good situation. But if the experience of places like Coorg in Karnataka and Kochi in Kerala are anything to go by, there is no reason to despair. The emerging breed of travellers – both domestic and international – seem to like alternate accommodations. The better ones among these little places in Delhi will get filled up in time. They just have to hold on.

Met a couple of interesting people that evening in Delhi – guys who are opening up a world of easier travel for the disabled.

Scott Rains : Scott is the man who put the disabled on the world agenda. He coined practically all the phrases that are today the cornerstones of all discourse on disability, including Universal Design. In fact, almost all US legislation on disability has the Rains imprimatur. Read Scott’s writings at the Rolling Rains report here.

Craig Grimes : Craig was the first person to demonstrate conclusively that the disabled are a definite ‘market’ in world travel. While living in Barcelona, Craig set up AccessibleBarcelona, a tour operator focused on helping the disabled have a good holiday in Barcelona. And made it into a viable and vibrant business. Craig now lives in Nicaragua and is at it again. Check out his latest venture – AccessibleNicaragua.

I also met Jani Nayar of Society for Accessible Travel & Hospitality in NY. They are a Non-profit that works to increase awareness of the needs of the disabled for Travel.

A common theme that ran through all of the conversation was the notion that disabled travellers form a large market. And that it is in the interest of the travel trade to focus on this market and make it easier for the disabled to get around. 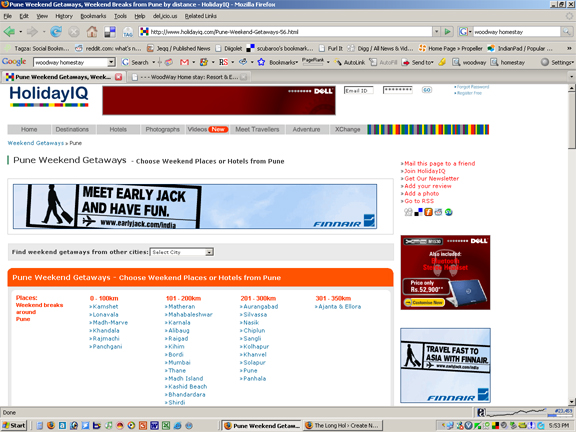 Weekend getaways from all 17 cities

It was another hot mid-day in 1979. The infamous loo was blowing in from the Thar desert across Delhi’s Rajpath. And a young boy walked past the black gates of The National Museum in the blazing sun. And walked into the the coolness provided by one of mankind’s ealiest inventions. Across the imposing front doors of the National Museum of India, from the ceiling to the floor was this huge curtain of khus fibre constantly kept moist by buckets of water being thrown on it. I dont know how many of you have had the good luck to smell the wonderful aroma of a khus curtain on a hot north indian day – it remains with me, so many years later.

The Punjabi migrants of Delhi converted this idea to a nifty little appliance to beat the Delhi heat. And since Punjabis are generally better are creating innovations than in naming them (a trait similar to the inventive Japanese, who succeeded in coming up with some of the corniest names for some of the best innovations around – think ‘walkman’!) they called it the ‘desert cooler’.

The desert cooler was a 3 part contraption. It’s body was a covered box in which all sides are walls of khus fibre held in place by a wire mesh. Its underbelly was a huge tank which held many litres of water and its soul was a massive fan and a pump. Now, this is what happened. As soon as you switched on the desert cooler, the pump would start to pull up water from the tank and start to trickle it down on the khus across all the walls of the box. Inside the box, facing into the room was the fan which would soon start to rotate thunderously and effectively suck up the moisture from the surrounding walls of khus and throw it with great force ino the room. Voila, a very cool room, albeit one with an extraordinary amount of moisture.

I still recollect this room I stayed in for a few years in Delhi. Shaded by a neem tree and blasted by a huge desert cooler, I spent many a Delhi summer swathed in a razai, which I believe I have never bested before or after for pure hedonism.

But as incomes have risen, the harsh beauty of the Airconditioner has replaced the comely desert cooler (although calling a Punjabi beauty ‘comely’ shows a deeply besotted mind!). And as I keep an unsuccessful eye out for the Desert Cooler everytime I go to Delhi in summer, I cannot help mourn its passing. With it has passed an age of innocence. 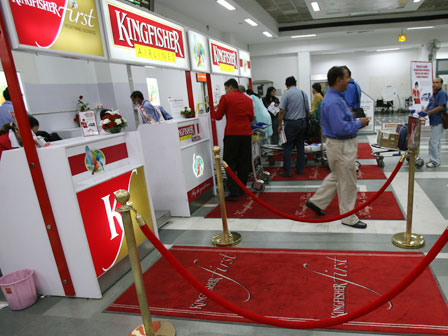 I am just back from a quick business trip to Delhi which coincided with the coldest week in Delhi in 28 years. Not good news – but as luck would have it, the first day there turned out to be very cold but very sunny, which is a lovely combination. So, escaped unhurt.

For old times sake (and because they have a bloody early morning flight from Bangalore), I flew Indian Airlines, which has now been determinedly renamed Air India. Unfortunate. Because in the process, Indian Airlines, which I have always had a soft corner for, is really starting to resemble Air India, which according to me is unquestionably among the the 10 worst airlines in the world. So, here is an emotional requiem to Indian Airlines; RIP.

Among the obscene prices for hotels rooms in Delhi, I was able to wangle a slightly less indecent price (fairly crazy nevertheless) from the The Taj Palace hotel by booking a no-cancellation room, way ahead of time on the Taj Hotels website. It is always nice to stay at the Taj, because somewhere they have perfected the art of clean & efficient luxury service without the ‘looking-you-over’ approach of some Indian luxury chains, not the least of which is the Oberoi. END_OF_DOCUMENT_TOKEN_TO_BE_REPLACED

The Long Hol
Create a free website or blog at WordPress.com.